Fire Station With a Pedigree 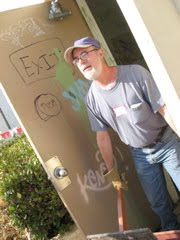 Mark Crawford (pictured) of the Mar Vista Historical Society has submitted another fascinating reflection on the history of the area surrounding Historic Fire Station 62. It comes from his forthcoming book, Distant Vistas: Exploring the Historic Neighborhoods of Mar Vista. You may recall that last spring Mark had given us a preview of some of his research. Crawford writes:

When the ad hoc committee to preserve the Mar Vista Fire Station 62 and convert it into a community center began referring to it as historic, not a few people scoffed at the notion that this seemingly unexceptional, unkempt edifice had a right to such a lofty designation. But an impartial assessment of the facts should convince anyone of the validity of that term.
The land on which the fire station sits was part of a 335-acre parcel owned by Samuel Cripe, an Indiana farmer who settled in the Ballona Valley in the late 1870s. Besides cultivating such crops as alfalfa, lima beans, peas, blackberries, string beans, Irish potatoes, and corn (100 bushels to the acre), Cripe operated a kiln in Santa Monica manufacturing bricks in what was one of that city’s first industries. His pressed bricks were regarded by experts as among the best made in the country and were used in the 1888 Soldiers Home in Sawtelle, today the site of the Veterans Administration. Cripe also helped raise the $300 that was used to finance the first school ever built in Mar Vista territory, the Machado Public School, erected in 1895 at the present-day corner of Walgrove Avenue and Zanja Street.
In the late 1880s Cripe’s son Jim began farming a 40-acre spread that included the fire station site. In 1905 Jim Cripe subdivided some 20 acres of his farm to create the sixth-oldest residential neighborhood in Mar Vista, Venice View Heights. Lots 1 and 2 were prime real estate, situated as they were at the southwest corner of the tract, at the junction of Ballona Road No. 2 (Centinela Avenue) and Windward Avenue. Ballona Road No. 2 was one of the few north/south throughways in early Mar Vista, and as it intersected the Pacific Electric rail line at Venice Boulevard, one of the most important in the development of the community.
On December 12, 1947, the City of Los Angeles purchased lots 1 and 2 for $6,110 to build a fire station to replace the outdated Venice Firehouse on the corner of Main Street and Rose Avenue. Construction on the 50 by 110 foot building didn’t begin until the last week of November, 1949; the $77,500 “bungalow-style” station was completed in July of 1950. Fire Station 62 was formally dedicated on August 25, 1950.
The eight-man crew that moved into the Mar Vista station – Engine Co. No. 62 – formerly worked at the old Venice Firehouse. Built in 1906 by the city of Ocean Park, the Venice firehouse was a two-story wooden structure with a bell tower and a stable for the horses that pulled its first fire wagons. The horses were originally pressed into service from the teams used by the City of Venice for street cleaning and garbage collection, the stables of which were on Rose Avenue. The original fire fighters were all volunteers; city employees cared for the horses and rang the bell when a fire broke out, which called the volunteers to the station house. Their first motorized engine, a two-cylinder Buick, was acquired in 1911. When Venice merged with Los Angeles in 1925 the station became Engine House 62. The city of L. A. replaced the old fire engines with three “modern” ones: a 1918 hose-wagon, a 1923 1000-gallon capacity American-La France engine, and a 1920 Seagreave relief pump and hose carrier. Incredibly, those three machines were used by Engine Co. No. 62 until 1949, when they were furnished with a new Triple Action Seagreave engine. Today the old Venice Fire Station is the remodeled Firehouse Restaurant.
Prior to the Windward station Mar Vista didn’t have a firehouse of its own. When a blaze broke out in the area, the community had to rely on fire crews from either Culver City or Venice. But this could be tricky, for each crew had clearly defined, inviolable boundaries, and if, say, a Culver City fire engine showed up to put out a fire that was across the street from its authorized territory, it would simply turn around and go back to the station. Fire Station 62 served the community until 2007 when it was replaced by a new station at the southeast corner of Venice and Inglewood boulevards.

Simply turn around and go back to the station…. Ah, the good old days.

Connect with the Friends of Historic Fire Station 62 on Facebook for community updates & posts, events, and more.